I am very grateful for the invitation to speak to you at this Symposium on Christopher Butler, Abbot of Downside and Auxiliary Bishop of the Archdiocese of Westminster. It is fitting that we do this in the centenary year of his birth, and in particular that this reflection focuses on Bishop Butler's contribution and insights into the Second Vatican Council.

The town of Reading has not too many claims to fame – but that is debatable! However, in the footnotes of history it might be recorded as the home town of Abbot Christopher Butler and Cormac Murphy-O'Connor! Abbot Butler's family had a wine business in Reading and he grew up there. When we met we often talked about the 'old town' and its significance in the greater scheme of things. I only got to know Bishop Butler when I too became a bishop, by which time he was retired. But he always attended the Bishops' Conferences and there I began to appreciate his academic excellence, his dry humour and his theological insights, particularly his understanding of the Council.

For Butler the Council meant no less than 'a recovery of hope' and this renewed hope was based on two things. The first was the more balanced ecclesiology of Lumen Gentium and the second was the outward looking vision of Gaudium et Spes which declared 'the Church's commitment to serve the good of humanity in every sphere and its determination not to confine itself to matters of the sacristy or the soul'. 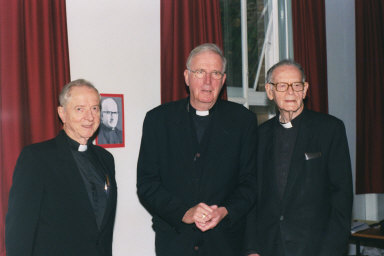 Although Butler was realistic about the historical pressures on Vatican I and never saw the Decree of 1870 as an outright victory for the Ultramontanes, he did recognize that its ecclesiology was lopsided and incomplete. It seemed to have the effect of turning bishops into papal curates who derived their teaching authority from a canonical mission given by the Pope. Anglican critics like Eric Mascall and Michael Ramsey thought so and believed with the Orthodox that a sacramental view of the Church had been submerged by an institutional view.

Butler was no anti-institutional man. He had learned from Baron von Hügel 'a deep, clear, realistic insight at once into the imperfections and the necessity of the institutional element of religion'. But again, with von Hügel, he was convinced that a healthy ecclesiology required the elements of the institutional, the mystical and the intellectual to be held together in balance, and came to believe that this could only be achieved by the recovery of the sacramental view of both Church and Episcopate.

'It should be possible', he wrote, 'by a prudent and daring application of the principle of subsidiarity, to take in hand a massive programme of decentralisation'. The Council, he believed, encouraged us 'to see the Church, not simply as an international society with a super-local government but as a sacramental mystery made fully actual wherever Mass is legitimately celebrated, and above all where the local bishop, surrounded by his clergy and faithful, is himself the celebrant'. And Lumen Gentium in its teachings says, 'In these communities though they may often be small and poor, or existing in the diaspora, Christ is present, through whose power and influence the One, Holy, Catholic and Apostolic Church is constituted'. 'The universal koinonia', Butler comments, 'is thus made actual at a particular place and time, and the international church is to be seen not only as a societas fidelium but as a communio ecclesiarum'. [Searchings, p.247.] There are hints here of the current debate on this issue between Cardinals Ratzinger and Kasper. It is a very healthy debate on the future of the Church.

If Butler was given hope by Lumen Gentium he was also given hope by Gaudium et Spes. Although conscious of the fact that this Constitution on the Church in the World Today was imperfect, having been himself involved in the rather hasty cobbling together of it under the pressure of time, yet he believed that it was 'a great document', registering 'the Church's commitment to serve the good of humanity in every sphere'. It gave substance to Lumen Gentium's affirmation that 'the church is in Christ as it were a sacrament or sign and instrument of inward union with God and of the unity of the whole human race'. Instead of standing over against the world, the Church stands in solidarity with the whole human family entering into dialogue with it over its many problems. To put that in scriptural terms, the Church is not only the 'city on the hill' but the 'leaven in the mass'.

The Church which shares 'the joy and hope, the grief and anguish' of the people of our time is a Church of listening, one which has ears as large at least as its mouth. For Butler 'dialogue' was not a matter of trendy political correctness, it was deeply embodied in the Council's understanding of revelation. 'By this revelation, the invisible God, from the fullness of his love, addresses men as his friends and moves among them, in order to invite and receive them into his own company'. [Dei Verbum, 2.] As Butler comments: 'We are not in the classroom where a divine philosopher, himself unseen, dictates abstract ideas to pupils of high intelligence. We seem rather to be in the original paradise, where an infinitely loving God calls to us, accosts us as his friends, woos us to his friendship. It is the â€œheart speaketh to heartâ€ of John Henry Newman's motto.' [Theology of Vatican II, p.30.]

Butler was particularly impressed by the fact that the bishops at the Council, instead of nagging and rebuking the world, 'wanted to listen to the world'. Of course, only by thus listening could the Church exercise its responsibility of 'reading the signs of the times'. All this resonated mightily with the writing of Jean Pierre de Caussade and his teaching on the 'sacrament of the present moment'. 'God speaks still today, as he spoke to our forefathers', a teaching to which Butler had been introduced by Abbot Chapman and to which he became greatly indebted. On which Butler commented: 'The human spirit is not reduced to mere dependence on the records of alleged divine utterances in the past. The living spirit needs to hear a living voice, and the word of God is both contemporary and unique.' [A Time to Speak, p.65.]

On this day let us thank the Lord for the memory and the work of Bishop Christopher Butler and for the things that he learnt and contributed during his time as monk and bishop. Let us also learn from him to look at the deep things beyond the transitory nature of present history and see the life and mission of the Church which is 'ever old and ever new'. Let us be encouraged and inspired by the light of the Holy Spirit to begin, yet again, to listen to the living voice of God's Word that we may be, like Bishop Butler, true heralds of the Good News of Jesus Christ to our world.