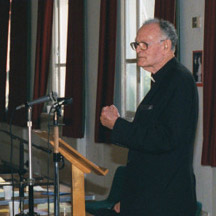 The presence of the late Archbishop Hurley at the symposium was an unexpected bonus. This paper, less formal in style than the others, represents a digest of the address which he kindly agreed to give at very short notice.

Participating in this symposium today has aroused much of the emotional, intellectual and spiritual feelings I experienced at the Council itself. Today we have heard a great wealth of theology from the Catholic Church of Great Britain.

This is something of a surprise to me, as the English contribution to the Council was not really outstanding, except for the part played by Abbot Butler which, for some strange reason, was not well known to me at the time.

In the preparation for the Council I was nominated a member of the Central Preparatory Commission, which held several meetings in the period leading up to the first session. The role of this Commission was to review the papers submitted by other particular commissions on various aspects of Church life and to finalize them for submission to the Council. By April/May of 1962 I was in despair and suffering a lack of faith in the Holy Spirit. How could the Council commence with the papers (called 'schemas') in such a condition? This was confirmed in conversations I had with several leading cardinals like Liénart, Alfrink, König, Frings, Döpfner and Suenens. They could offer no help and John XXIII was giving no lead, so the only thing to do was trust in the Holy Spirit. Only the schema on the liturgy was in a presentable state. This was due to the work of the Secretary of The Preparatory Commission on Liturgy, Annibale Bugnini. He was a brilliant liturgist and had brought together all the finest brains on liturgy to prepare the schema.

Another presentable document was that produced by the commission under Cardinal Bea, the German Jesuit who was the antithesis of Cardinal Ottaviani, Secretary of the Holy Office. Cardinal Bea became the figurehead for the progressive tendency within the Council. In 1962 British European Airways were running an advertising campaign with the slogan 'Get there with BEA' and it was said that posters with this slogan were displayed even on the walls of the Holy Office!

The Council opened on 11 October 1962 with a most impressive procession of assembled bishops. Some of us, having assembled in a hall of the Vatican Museum prior to the procession, were forgotten by our assistant master of ceremonies and missed the main procession through the Piazza of St Peter's. We were subsequently rushed down the back stairs of the Vatican palace and inserted into the stream of prelates as they entered the Basilica. The sight of the prelates filling the rows of benches rising on both sides in St Peter's was breathtaking, a canyon of white mitres.

On the first day of business the initial agenda item was to elect members to the Council commissions, which were very important because of their responsibility for amending schemas and finalizing them in the light of the discussion on the Council floor. There was much uncertainty and confusion about electing members to these commissions, as most of the Council Fathers did not know one another. It seemed as if the Curia had hoped that the Fathers would vote for those who had already served on the preparatory commissions, which had been dominated by the Curia. But, in response to this, some of us had been told to wait, not to rush in completing our names on our voting forms. Certain Council members and leading theologians had become fully alive to the situation. The suspense was broken when Cardinal Liénart broke the silence with the proposal that the vote should not be taken until the Council Fathers, through discussion in their regional or national groups, had come up with eligible candidates. This proposal was seconded by Cardinal Frings. There was a hurried consultation at the presidential table and then Cardinal Tisserant announced that the proposal was accepted and suspended the sitting. The Fathers streamed out of St Peter's, giving an impression to the world that the Council had ended after about fifty minutes. Over the following three days the Fathers met in their various groups to identify nominees for the commissions.

The debate on the liturgy went smoothly, thanks to the good preparation of the schema before the Council. However, when the schema on Revelation which spoke of two sources of revelation, prepared by the Commission headed by Cardinal Ottaviani, was put forward, there was a heated debate. In common with many of the Council Fathers at this time I knew nothing of the theological arguments on the subject of revelation that lay behind the document which reflected the traditional teaching. The subsequent debate made known the newer theological approach, as a result of which the original schema was rejected, as was the schema on the Church later on. This meant that drafts had to be rewritten from scratch, which gave scope for more progressive teaching. Cardinal Ottaviani was overheard, on emerging from the aula after one of these decisive debates, to mutter under his breath that the Council was a 'robber's den', a description that had been applied to the Council of Ephesus in AD 449.

The experience of the first session led Pope John to decide that a proper Agenda Commission be set up. Its work would lead to a more logical, realistic, theological and conciliar form of action.

I knew Butler slightly at the Council, but this symposium has brought out his part in the Council more fully, in particular his contribution to the revised schema on the Church. In the debate on the revised schema when many individuals were offering apologies for past wrongs of the Church committed against other Christians, an Australian bishop retorted that he was tired of all this apologizing. When Butler responded to this comment in his distinctly English Latin, those who could understand his accent were reduced to laughter by his suggestion that 'news of the Reformation had not yet reached Australia'.

The formal sessions of the Council were held only in the morning and closed at one o'clock for lunch. In the afternoons and evenings, what must be one of the greatest adult education programmes ever run took place through informal discussions and gatherings in small groups. It was in these that the Council Fathers learnt of the new theological developments which were to find expression in the Council documents. One reason that I did not get to know Butler well at the Council was that he tended not to participate in these activities. He would return to Sant'Anselmo, the Benedictine college in Rome, where he was staying, in order to study what was going to be debated the following day: he was a great preparer. Later on, I got to know him well when he came out to South Africa and lectured on Vatican II at one of the Theological Winter Schools that we organized there. It was at these that I realized his qualities as a theologian and speaker.

I was on the progressive side as a consequence of reading the writings of the likes of Rahner, Congar and Chenu, which changed my theological outlook. Émile Mersch's The Whole Christ had a particular effect on me regarding the notion of Christ within us, as did F.X. Durrwell's The Resurrection. The works of Teilhard de Chardin invaded me, heart and mind, body and soul. I was infuriated when the Vatican issued a caution against his works which were to be removed from seminary libraries. I and others spoke for Teilhard in the Council regarding his insistence on the presence and love of Christ in ourselves and Christ in the universe and on the need to bring science and theology together. It was through my support of Teilhard that I developed a friendship with Henri de Lubac who had been for a long time a friend and supporter of Teilhard.

An unforgettable event occurred on 7 December 1965, the penultimate day of the Council, when the mutual excommunication between the Catholic and Greek Orthodox Churches was lifted; the reconciliation was movingly signified when Pope Paul VI moved forward to embrace the Delegate of the Ecumenical Patriarch. The closing of the Council on 8 December was also a memorable occasion.

The intervening years have faded away since I have experienced the joy and inspiration of the Council at this symposium today.