To His Grace
The Duke of Norfolk
Hereditary Earl Marshal of England etc. etc.

My Dear Duke of Norfolk, 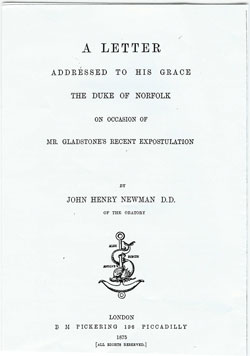 When I yielded to the earnest wish which you, together with many others, urged upon me that I should reply to Mr Gladstone's recent expostulation, a friend suggested that I ought to ask your Grace's permission to address my remarks to you. [Newman absolves the Duke of any responsibility for the letter's contents] ....... on a very serious occasion when such heavy charges have been made against the Catholics of England, by so powerful and so earnest an adversary, it seemed my duty, in meeting his challenge, to gain the support, if I could, of a name which is the special representative and the fitting sample of a laity, as zealous for the Catholic religion as it is patriotic. [Newman continues with thanks for the Duke's agreement and grieves] ....that Mr Gladstone has felt it his duty to speak with such extraordinary severity of our religion and of ourselves. [Concluding an extended Preface Newman writes:] But I have said enough by way of preface and without more delay turn to Mr Gladstone's pamphlet.

It may be repeated that Gladstone's pamphlet - the 'expostulation' - had been occasioned by the definition of papal infallibility at the First Vatican Council. Newman's response in the 'Letter' consists of a book of almost 150 pages and contains ten Chapters: 1) Introductory Remarks, 2) The Ancient Church, 3) The Papal Church, 4) Divided Allegiance, 5) Conscience, 6) The Encyclical of 1864, 7) The Syllabus 8) The [First] Vatican Council, 9) The Vatican Definition, 10) Conclusion.

In the 'Conclusion' Newman stresses the injustice of Gladstone's charge that Catholics have 'no mental freedom' and: 'that we do not deserve his [Gladstone's] injurious reproach that we are captives and slaves of the Pope'. Newman acknowledges: 'that there is only one oracle of God, the Holy Catholic Church and the Pope as her head'.

[Newman's 'Letter' to the Duke of Norfolk ends]

And now my dear Duke, I release you from this long discussion, and, in concluding, beg you to accept the best Christmas wishes and prayers for your present and future from

Your affectionate Friend and Servant.

It will be clear from the above that Newman's 'letter' covered a far wider range of subjects than the question of conscience, which was the subject of his Chapter five. It can only be urged that the whole work be studied in whatever edition. For the purposes of this website, extracts follow from Newman's Chapter five on Conscience.

[Editorial Note: After covering so much ground relevant to Gladstone's attack in his previous chapters, Newman begins the fifth with: " It seems, then, that there are extreme cases in which Conscience may come into collision with the word of a Pope, and is to be followed in spite of that word." He then spends nine pages giving reasons and examples, until at the end of section 3. we come to:]

Was St. Peter infallible on that occasion at Antioch when St. Paul withstood him? was St. Victor infallible when he separated from his communion the Asiatic Churches? or Liberius when in like manner he excommunicated Athanasius? And, to come to later times, was Gregory XIII, when he had a medal struck in honor of the Bartholomew massacre? or Paul IV, in his conduct towards Elizabeth? or Sextus V when he blessed the Armada? or Urban VIII when he persecuted Galileo? No Catholic ever pretends that these Popes were infallible in these acts. Since then infallibility alone could block the exercise of conscience, and the Pope is not infallible in that subject-matter in which conscience is of supreme authority, no dead-lock, such as implied in the objection which I am answering, can take place between conscience and the Pope.

4. But, of course, I have to say again, lest I should be misunderstood, that when I speak of Conscience, I mean conscience truly so called. When it has the right of opposing the supreme, though not infallible Authority of the Pope, it must be something more than that miserable counterfeit which, as I have said above, now goes by the name. If in a particular case it is to be taken as a sacred and sovereign monitor, its dictate, in order to prevail against the voice of the Pope, must follow upon serious thought, prayer, and all available means of arriving at a right judgment. on the matter in question. And further, obedience to the Pope is what is called "in possession;" that is, the onus probandi of establishing a case against him lies, as in all cases of exception, on the side of conscience. Unless a man is able to say to himself, as in the Presence of God, that he must not, and dare not, act upon the Papal injunction, he is bound to obey it, and would commit a great sin in disobeying it. Prima facie is his bounden duty, even from a sentiment of loyalty, to believe the Pope right and to act accordingly. He must vanquish that mean, ungenerous, selfish, vulgar spirit of his nature, which, at the very first rumour of a command, places itself in opposition to the Superior who gives it, asks itself whether he is not exceeding his right, and rejoices, in a moral and practical matter, to commence with scepticism. He must have no wilful determination to exercise a right of thinking, saying, doing just what he pleases, [-] the question of truth and falsehood, right and wrong, the duty if possible of obedience, the love of speaking as his Head speaks, and of standing in all cases on his Head's side, being simply discarded. If this necessary rule were observed, collisions between the Popes authority and the authority of conscience would be very rare. On the other hand, in the fact that, after all, in extraordinary cases, the conscience of each individual is free, we have a safeguard and security, were security necessary (which is a most gratuitous supposition), that no Pope ever will be able, as the objection supposes, to create a false conscience for his own ends.

Now, I shall end this part of the subject, for I have not done with it altogether, by appealing to various of our theologians in evidence that, in what I have been saying, I have not misrepresented Catholic doctrine on these important points.

That is, on the duty of obeying our conscience at all hazards.

I have already quoted the words which Cardinal Cousset has adduced from the Fourth Lateran; that "He who acts against his conscience loses his soul." This dictum is brought out with singular fullness and force in the moral treatises of theologians ....

[Newman then gives more particular examples and concludes the chapter with:]

Thus, if the Pope told the English Bishops to order their priests to stir themselves energetically in favor of teetotalism, and a particular priest was fully persuaded that abstinence from wine, &c., was practically a Gnostic error, and therefore felt he could not exert himself without sin; or suppose there was a Papal order to hold lotteries in each mission for some religious object, and a priest could say in God's sight that he believed lotteries to be morally wrong, that priest in either of these cases would commit a sin hic et nunc if he obeyed the Pope, whether he was right or wrong in his opinion, and, if wrong, although he had not taken proper pains to get at the truth of the matter.

Busenbaum, of the Society of Jesus, whose work I have already had occasion to notice, writes thus: "A heretic, as long as he judges his sect to be more or equally deserving of belief, has no obligation to believe [in the Church.]" And he continues, "When men who have been brought up in heresy, are persuaded from boyhood that we impugn and attack the word of God, that we are idolators, pestilent deceivers, and therefore are to be shunned as [pestilences] <pests>, they cannot, while this persuasion lasts, with a safe conscience, hear us. "-t.1, p. 54.

Antonio Corduba, a Spanish Franciscan, states the doctrine with still more point, because he makes mention of Superiors. "In no manner is it lawful to act against conscience, even though a Law, or a Superior commands it."-De Conscient., p. 138.

And the French Dominican, Natalis Alexander:-"If, in the judgment of conscience, though a mistaken conscience, a man is persuaded that what his Superior commands is displeasing to God, he is bound not to obey."-Theol. t. 2, p. 32.

The word "Superior" certainly includes the Pope; but to bring out this point clearly Cardinal Jacobatius <brings out this clearly>, in his authoritative work on Councils, which is contained in Labbe's Collection of them, introduces <introducing> the Pope by name:-"If it were doubtful," he says, "whether a precept [of the Pope] be a sin or not, we must determine thus:-that, if he to whom the precept is addressed has a conscientious sense that it is a sin and injustice, first it is his duty to put off that sense; but, if he cannot, nor conform himself to the judgment of the Pope, in that case it is his duty to follow his own private conscience, and patiently to bear it, if the Pope punishes him."-lib. iv, p. 241.

Would it not be well for Mr. Gladstone to bring passages from our recognized authors as confirmatory of his view of our teaching, as those which I have quoted are destructive of it? and they must be passages declaring, not only that the Pope is ever to be obeyed, but that there are no exceptions to the rule, for exceptions must be in all concrete matters.

I add one remark. Certainly, if I am obliged to bring religion into after-dinner toasts, (which indeed does not seem quite the thing) I shall drink, – to the Pope, if you please, – still, to Conscience first, and to the Pope afterwards. [End of chapter 5]